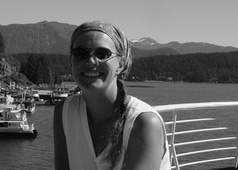 I live in Juneau, Alaska which is a town of 30,000 writers, fishermen, senators, and average folk making a living in Alaska.  The town nests on a small lip of land between the Coast Mountains and the Inside Passage of the Pacific Ocean.  Juneau is in the middle of the Tongass National Forest which is the largest temperate rainforest in the world.

I am a Professor of Creative Writing at the University of Alaska Southeast.  I've been teaching creative writing workshops there for over 25 years and deeply enjoy my work.  One of my greatest pleasures is in teaching writers of all ages to craft poems and stories.

​I grew up in Portland, Oregon and earned an undergraduate degree at Colby College, where I studied with the poet Ira Sadoff.   I earned my M.F.A. from the University of Arizona.  My mentors there included Richard Shelton, Allison Hawthorn Deming, and Steve Orlen.  I won a graduate fellowship while there and began my teaching career at Pima  Community College in West Tucson.

I've been writing and publishing poems for over 30 years.  I primarily write lyric and narrative poems, and have recently begun to work extensively with form poetry. I'm currently working on a trilogy of persona poems.